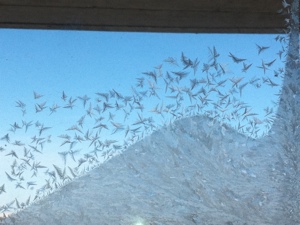 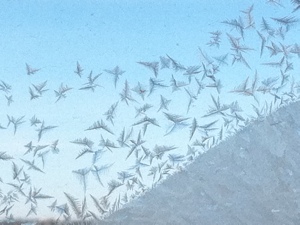 I think the wee frosties look like birds flocking into the sky; rising up from their frozen mountain home . . .
Beautiful, isn’t it?

I was tired of my usual breakfast, the frost looked very wintry (even though we’re toasty warm in here) and I had a sudden craving for one of my favourite ‘treat’ breakfasts: French Toast! When I was growing up, we had this or pancakes on Sunday mornings; later in my life I acquired a waffle iron (which I still have, as well as an identical one given to me by my Aunty who lives here) and waffles joined the ‘special breakfast’ lineup. MMMmmmmm…….
I know you all know how to make French Toast, but I’m sharing my photos and ‘technique’ anyway in case of a newbie hippie frugal cook tripping onto this site . . .

Put the cast iron frying pan on over medium or low-medium heat, then begin: you need (this makes two pieces; adjust quantities to suit yourself and your family):
2 eggs, an ounce or so of water, a dash of canned milk (regular milk works too; this is what I’m used to; haven’t tried soy, but assume it would work as well). Now: beat the eggs, add the water (we have a filter/aerator on the faucet, so the water sprays in, adding a bit of bubble); beat again, add the milk (I don’t measure the water or the milk, it’s not crucial unless you add enough to make soup! Beat again. Lay a piece of bread in the egg mixture. Quickly add a bit if butter or marg to the pan. Turn the bread over, leave for a few seconds (you don’t want it to soak through and fall apart), then lift carefully and lay it in the pan. I turn the heat down a bit at this point. 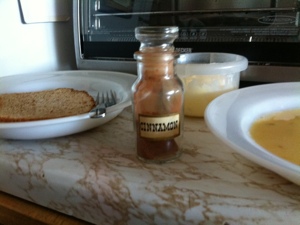 I like to sprinkle a bit of cinnamon on one side after I put the first piece in the frying pan. This my Mum’s spice jar from a set she’s had for five decades, more or less.

When ready, turn over the bread and turn the heat down to half-way between medium and off. If you are not using a cast iron pan, you can leave the heat as is; cast iron holds heat very well and you don’t want to scorch your breakfast. When done, place on a plate, add a wee bit more butter/marg, then repeat with another slice of bread. 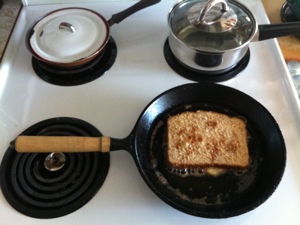 When you have enough Toast, if you have leftover egg mix (and I always do), add a last bit of butter/marg to the pan, let melt, then turn the egg mix into the pan for lovely scrambled eggs. 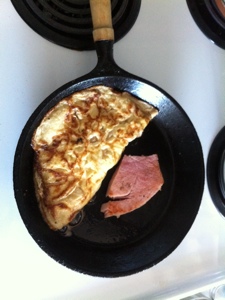 I like to fold mine over. I felt like a bit of Hamlet, too: you can see it warming up beside the eggs there. Now I turn the heat off.

Today I splurged and heated some frozen strawberries to put on top of the Toast. But first, I cut the Toast into bite-size pieces:

I like not having to fiddle with a knife while holding my plate. . . . and Voila!

it wouldn’t be as much of a treat without real maple syrup, would it? I had an orange with this, too, but no photo of that . . .