Hello, my friends! Sorry I’ve been so lax of late; lots going on here that I won’t write about. Just a bit more stress than I’d anticipated, coupled with less computer time, so my FeedReader has been sadly neglected and I doubt will ever be caught up with. For now, I thought an update would be a good thing (just so I don’t start getting RIP comments . . .) 😉

I’ve been with my Aunty six out of the past eight weeks and am sadly behind in getting things done here at Mum’s as well as online. Two three-week stretches with only a week between were quite unexpected and I had to do some fast juggling of commitments as well as just letting some things go. In addition, she is now quite used to having company most of the day, so even when I’m upstairs, she comes up anywhere from one to five times most days. This week there was only one day without a visit. We are always glad to see her, of course, and she needs the companionship, but it means dropping whatever I’m doing at the moment so we can sit and chat. A good thing, but it does impact my plans a bit.

I have had a few issues with our building for some time, but now there are new things to gripe about. I won’t list all my grievances or I expect I would have no followers!

Above is a photo of the new front steps to our building. The steps themselves are quite shallow, so when going up and down I have to turn a bit sideways so my whole foot is supported. Note the absence of railings. This means that I am quite unsteady when pulling my rolly cart-bag with 60-70 lbs of groceries up the steps. It also means that several people in the building are no longer as independent as they would like, as the only was to go up and down safely is to have a companion to hang onto. This is obviously not as safe as a railing (what if one person slips / falls?) And I won’t mention the dreaded seven or eight months of ice and snow . . .

So I let other tenants know the railings were not being replaced and several people were quite concerned and spoke to the condo board. So now I hear there will be a railing, but only one, and that one up the centre! So how does someone with less mobility than a 20 year old get from the top of the railing to the door safely? I am feeling increasingly that women, especially older women, are ‘not wanted on the voyage’.

Today I put a load of washing in the machine for our floor, planning to get a few things done inside during the 30 minute wash and 55 minute dry. When I went to transfer the clean things (only two single sheets, two large bath towels and a few assorted items of clothing), the machine was happily displaying ‘LID” although the darn thing was down.

I took photos so I could prove my complaint if needed. Only a half load of wash, as the towels were heavy, as you can see. 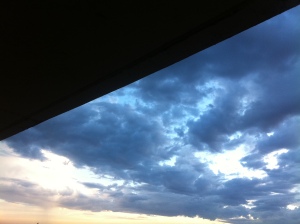 We’ve had a lot of skies like these lately, but not much of this:

Pity, ’cause we could use a few days of nice mild rain. We did have a series of flash storms with lightning and thunder, which resulted in people having flooded basements where it had never happened before. My walking friend had sewage backup and had to throw out everything in the basement, including photo albums, keepsakes from a friend who recently passed away, furniture, books, the furnace, freezer, washer and drier. Also the flooring and the drywall. Good thing she’s smart and had insurance. The city has a programme that will help her and others install a back-flow valve to prevent this happening again. Talk about de-cluttering! Except it wasn’t clutter . . . just a nice, finished basement.

I was out driving with my philosopher friend on one of those nights and the water in the streets was halfway up the tires of her car. Incredible lightshow, though; we could have driven around all night just admiring the lightning . . . but I felt badly the next day when I heard on the news about all the flooding. My walking friend’s place flooded in a later storm. One of her friends, only a couple of blocks away, had to wade through three feet of water to get to the steps to her house. After the downpour ended, the water drained away quite quickly; a couple of hours later it was hard to believe anything had happened . . .

My crafty friend finally broke down and took me to the ‘Re-Use-It Centre’ here. People donate all sorts of things, from toilet tissue rolls and milk jug lids to books, leftover or unwanted craft materials, fabric, zippers, patterns (tonnes of those!), corks, quilt batting, etc., etc., etc. She took me a second time a couple of weeks later, too. Did I mention that the first time I filled two cardboard boxes with things Mum or I may want; anything we don’t will be donated back to the place. The second time I only took one box and that was not full. My friend had a shopping cart heaped to overflowing, including my things, both times. Guess what we paid for it all? (well, she paid as a treat to me)

The outside of the centre.

Inside . . . everything (or nearly everything) is in these bins, which are labelled to help volunteers place items and customers to harvest them . . .

Did you guess $5.00 for as much as you like? That’s right! $5.00!! whether you take one book or wee ornament or several shopping carts full . . . now, wasn’t I restrained? Probably ’cause we don’t really have much room, even for cherished items and there seems to be little point in putting more into the storage unit. Although I’ll make exceptions for a few things . . .

One thing I picked up and gifted to my crafty friend’s crafty husband was this:

I already have a copy; it’s the first book I bought way back when I purchased my table loom, which for now has been loaned to my crafty friend’s crafty husband, as he wants to learn to weave. Along with

My copy has a different cover, but it’s the same book. Invaluable if you don’t have help when putting the warp onto your loom.

I found a few other things, of course, but don’t have pictures yet to share. Next post, likely.

Well, some of you had requested that I post a photo of Jenny, once she was created, so here’s a picture of the happy couple:

and here’s a close-up: My crafty friends have downsized the herd of wee dogs to two teacup Pomeranians moved the reptile cages downstairs and installed a cage with two lovely mourning doves in the living room:

The birds are allowed out to fly and are very tame and easy to handle. I prefer doves in outdoor cotes, myself, but that’s not so easy to do in the city. Something like this three story cote (the top two levels are the cote itself; the lowest level is a lovely art gallery) that was built by a good friend on Saltspring Island.

My crafty friends also have three salt water aquaria, two in the living room and one downstairs: 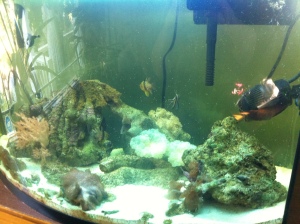 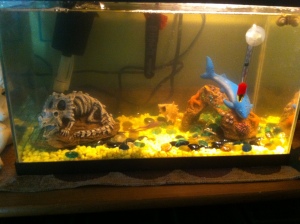 All the sand and ‘rock’ are living organisms, the ‘rock’ is coral. There is a long legged starfish and quite a variety of other fish, including an angler fish who is quite small, but managed to ingest two of the most prized and much larger fish. Sort of like a python swallowing a goat, I understand.

I don’t care for cleaning fish tanks or bird cages, although I quite like mucking out a stable, barn or henhouse, so you will likely never see an aquarium or caged bird in my living room . . . but they are fun to visit (sort of like some children; the very active ones)

The Fair Isle style bag is doing well and I am now in the middle of the handles, which will be shoulder-bag long. I’ve done a bit more on the ‘plain garter stitch’ shawl, but not enough for a photo yet. And I’ve begun a new project . . . what a surprise, eh? I’ll save the photos of that for another post, too. Else I might not have anything to say . . .

No sewing done for some time now and I’ve mislain a couple of things that should have been in the mail long since. The living room is full of project bags and items being sorted in preparation for either storing or sending to the Re-Use-It Centre. It’s all a bit much some days. Oh, to win the lottery and buy a large house with a very large workshop, big enough to set up Mum’s looms, her spinning wheel, and tables and cupboards for all the supplies so we could just go work whenever we liked, without all the ‘where did I put the darned wool?’ and ‘I know I have those needles somewhere’ and so on . . . In the meantime we’ll just keep on keeping on, as they say (my daily cup of KOKO); one day it will all get done . . .

Well, that’s all for now, folks; I’m sure your FeedReaders are sighing again . . .

See you soon. I have managed to ‘troll’ some of your sites to see what you and your assorted companions are up to, but am woefully behind on replying to comments on my last few posts. I hope to mend this soon . . .

In the meantime, enjoy your garden plantings and cleanings-up (depending on your hemisphere). I wish you gentle rains and no extreme temperatures (unless you are the sort to bask in them, or hibernate) 😉