I’ve been busy, as usual. Have not kept up with the FeedReader, but did manage to visit a few of you. But that’s not what the title refers to . . .

I’m still waiting to work on the project that I haven’t disclosed, but am quite happy with what I have accomplished; hence the ‘before voila!” title.

Look closely at the bottom hem: see? no needles! It was Sunday night yesterday (here, not in Australia or New Zealane) 🙂 and some of my favourite English shows were on PBS, out of Seattle. So I watched ‘Lark Rise to Candleford’, ‘Doc Martin’ (I didn’t care for the crusty old guy at first, but I have to admit he grows on you; well, on me, anyway), last week’s episode of ‘Downton Abbey’, followed by this week’s episode of same. then a couple of episodes of ‘Criminal Minds’ before I was done for the evening. In there, during last week’s ‘DA’, I made supper while listening from the kitchen, then ate it while watching this week’s ‘DA’, so it wasn’t all knitting . . .

The checkerboard bit along the bottom is actually double-stranded ribbing, which doesn’t gather up as one-strand ribbing does, but most Fair Isle style cardis seem to have boxy shapes, so I’m happy with it. There is a bit of texture, just enough to keep me contented. The navy rows at the end are double-straned, too: two rows of knit, one row of purl, two rows of knit. I did it that way so it can be folded to the inside along the purl row and then stitched down, to make a sturdier hem; however, I rather like the look of it as is, so it may not come to that . . .

While working on the ending, I suddenly noticed that a bunch of stitches on one of the sleeves were not secured by a knitting needle; you can see what it should have looked like on the left side of the photo. Instead, the bamboo needle plus green sock holder were in place, but no longer attached to the plastic cable. Guess I pulled it out while rotating the entire cardi in my lap . . . luckily, the needle had been in place for so long,the stitches didn’t unravel and were easy to pick up. Also luckily, I’d bought some extra needles recently . . .

I have to thank Jess of Rabid Little Hippy fame for her mention of these oranges. I’d never heard of them before; then, the next grocery shop, there they were, so I figured I’d pick up a few.

She’s right; they are like a cross between a regular orange and a blood orange (which I also like). The colour is especially appealing to me and these were sweet, but not too sweet; the orange tartness was fully present. Yum!

Back to the cardi: next I need to work on the sleeves, hand stitch up and down on both sides of the steek (that odd-looking section in the centre, for anyone new to this blog or to Fair Isle and Scandinavian knitting), then get out the scissors . . . it’s more exciting to cut knitting, now that I know for sure it won’t unravel . . . Then there will be the button and buttonhole bands to make. I’m still of two minds (as usual lol) about picking up stitches inside the collar and adding a double-stranded hood. I think I’ll do that, though. Even with a tuque, a hood is handy. I’m still mulling over exactly how to create it; it could be made separately and then attached, but I like the idea of being able to try it on and fine-tune it as I go along . . . beats the heck out of those “oops!” moments, closely followed by “oh, well . . .”

I’m planning to finish the sleeves with cuffs that match the bottom of the cardi, so have been debating whether I want to undo the collar and either make a new neck ending to match or a new collar that is more like the cuffs and bottom. That decision can wait, though. Good thing.

I haven’t forgotten about designing a simple Fair Isle style pattern, to encourage those of you who love to learn . . . it’s coming together in my head and soon will make it onto paper . . . I’m planning to knit along as I write it out, to be sure there are no oopsies to trip you up.

I haven’t mentioned the weather, have I? After the horrendous heat some of you have been dealing with, I can’t complain about any cold here. At least nothing died and inside we were fine with just adding a cardi and changing from jeans to sweatpants. I like being cosy . . .

A few days of almost -40C looked like this:

then, as things began to warm up, we had winds of around 100 kph, gusting to over 120 kph. That’s our general area; not sure exactly what it was here. But it was loud enough to keep me awake all one night and much of the next. So my internal clock has been hiccuping a lot. This next photo is the first morning; this table is in a very protected spot, but you can see the plastic covers blowing sideways. At times, they blew up above the table, but I couldn’t seem to click the camera at the right moment. One bag of money recyclables was blown over to the railing and wedged underneath. I suspect we lost some milk and juice cartons, but if so, they are ‘gone with the wind’. 🙂 I did find one lonely milk carton on the far end of the balcony (and it’s a long balcony!). 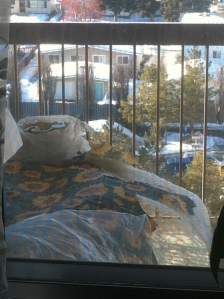 Since the winds died down, the temperatures have risen considerably; we’ve had up to +7C in the daytimes, and barely below freezing at night. Which makes for interesting walking conditions, to say the least. Wish I could ship that snowmelt to those of you undergoing droughty conditions. WE are meant to have these continue right into February. (I can’t believe I am writing ‘February’ already!).

I went to the library last Friday with the usual rolly cart full of books and videos to return. It was quite the adventure, just getting to a bus stop. A half block away we have a large auto/truck dealership. Their stock comes in on those huge two-layered trucks that are quite heavy. The latest delivery created very deep ruts in the snowslush and those ruts are now full of ankle-deep (or deeper) water. I was able to find my way to where our bus stop bench is (if I were going north to the mall, which I wasn’t that day), then I managed to get down the block to the lights. Crossing the main street was fine and downtown I only had to step in two puddles, which meant damp feet, but not too bad.

I have a new habit; I return books, etc., select and check out a new load, then take myself off to the Second Cup coffee shop that’s attached to the library and have a slushy coffee drink while I read whatever is my latest passion. That helps make up for my sadness at seeing these:

I had been a bit tristesse anyway, since last week I’d finally made it to the top of two long ‘hold’ queues for the latest in two series that I’ve been reading for some time (20 years for one of them). Both had sad and disturbing endings, which is not what I want just now. I know life has challenges and hard times and I don’t mind some of that in a book (Guy Gavriel Kay certainly doesn’t avoid the hard bits of life! but he doesn’t leave me feeling sort of gutted, if you know what I mean. You can learn more about him at Bright Weavings, too.) You will notice that I haven’t added links to the other two authors. I’m seriously miffed, although I expect I’ll get over it by the time the next volumes are out. Or not . . .

Anyway, I was delighted to find   what I thought was the latest in Ann Cleeves‘ DI Vera Stanhope series, “The Glass Room”, which lived up to my expectations quite magnificently. I finished it in two days, though . . . so now what to do ’til the next one appears? OK, news flash: I looked up the link to share with you and found a NEW Vera book . . . Harbour Street!  Thanks to all my readers; without you, I might not have found this for a while . . . it’s on order and I am 6th in line . . . so there is time for some knitting . . . 🙂

The music at Second Cup is always good; never intrusive and lacks all those irritating pop lyrics that catch my attention and make me want to shout back at them . . . the coffee slushies are great, too (they are not called ‘slushies’, they are ‘chillatte’s); and best of all, they are Canadian!

But I was speaking of the adventures of getting around this week: Saturday I went to the mall for groceries. The mall is in the next block north of us, and we are in the middle of our block. The store is on the north side of the mall, though. With the sidewalks covered in water and my winter boots good for snow, but not wet, I took the bus one block, went through the car park and then inside to the store. But coming home again was on my mind . . . in the end, not wanting to cross the main street (the street was fine, but those deep water-filled ruts at the opening to our access road are quite daunting.), I returned to the same bus stop I’d recently disembarked at, took the #9 bus one more block north to the transit centre, changed to the #9 going south, rode it all the way to the Kingsway transit centre, then changed again to a northbound  #9. This one let me off at the bench quite close to our entrance and I had only one ditch/rut to get across. No worries . . . so yesterday, I stayed home and knitted and caught up a bit with the FeedReader. A good day!

I was up early Sunday and this is what I saw, quite briefly, looking west! The shiny bit on the horizon that looks like the sun rising is actually its reflection. The colours were intense and far more lovely than the camera shows. I was awed, to say the least.

Well, on that lovely note, I am off to make some applesauce (and check the boxes of apples for spoilage), do more sorting and packing up, then maybe some knitting on those sleeves.

I have some overdue work to do on my 365-day project, too. Thanks to Pauline, our lovely Contented Crafter; it was through her site that I discovered Gretchen Miller and the Revo’lution projects. A lot has been happening that I’m not going to write about, so I am a wee bit behind, but now feel firmly back on track . . .

Have a wonderful week, everyone; stay warm or cool as desired.