A box arrived at the post office last Tuesday. I walked up there Wednesday evening, only to learn that the PO closes at 8 pm and I arrived at 8:13! So off home again. Thursday Mr. and Mrs. Crafty picked me up just before 11 am (and I was up ’til 2 am, so I’m proud to say I was up, dressed, fed and ready to go!) for a day at their place crafting and watching movies. They had time to swing by the PO, though, so we picked up the box. Then we took my six big bags of cash recycling to the depot, where I raked in $30 and change, then we stopped so I could buy us all a blended iced coffee drink, then to their house and lunch. After lunch, Debbie (yes, Debbie from the shop is my Mrs. Crafty friend) made up some Feather Biscuits (bread buns for you southerners, before you start drooling over the supposed sweetness . . . they are worth drooling over for themselves, though, I assure you!) and a large pot of chili for our supper. Then we got down to business. Due to later events, which I shall share shortly, there are no pictures of the activities at the Crafty Cottage. I apologize . . .

In total defiance of Anticipation 101, Mrs. Crafty insisted I open my long-awaited box immediately, so I did. I knew who it was from, and so will you, when you see the return address illustration:

Yep, it’s a box from my lovely friends in Olalla, formerly the Bearded One and Christi of the Farmlet, soon to be Aloha B.O. and Christi (or some even more exotic moniker). I knew she’d sent it, but not exactly what it contained. I was so excited when I opened it!!

There was a gorgeous postcard, too, with a sweet note on the reverse: 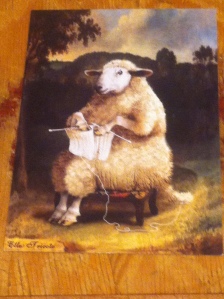 Don’t know how clear this picture is, but the sheep is knitting with yarn forming from her own fleece . . . I adore this, Christi, and it now resides atop the fridge next to a photo of a friend’s family, where I see it frequently throughout the day:

Are you wondering what else was in the box? I didn’t take pictures of every book yet, but I was delighted to find they are all new to me and every single one is of great interest, especially this one:

Written by a Norwegian woman, it is set in the Dakotas at a time close to when my mother’s parents lived there. My Grandmother was 9 in 1900, when she, her sisters and their mother came through Ellis Island and went to North Dakota. She finished growing up there, met my grandfather, who came to the States on his own at age 19 in 1909. They married and had two children before they, along with their parents and some of their siblings and families, moved to southern Saskatchewan to homestead various sections of land. I’ve never known much about their years in N. Dakota, so am very excited about reading this book. The other books look equally promising, too.

Robertson Davies is a Canadian author, but I haven’t read anything of his for some time, so this will be interesting, for sure.

As good as the contents, the box: 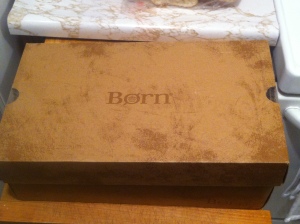 You have to be a paper fancier to understand that one! I love paper of all sorts, why I cannot tell you, but if you were to go through my things you’d find a LOT of paper, books (blank and reading), blank journals, writing paper, foolscap, sketchbooks and more . . . This box is special (besides the fact that it came from Christi and the B.O.) because it is heavier than the shoeboxes I am familiar with; this is a perfectly lovely box. (and yes, before you ask, I have a fair collection of boxes of all types and sizes to which I am attached). 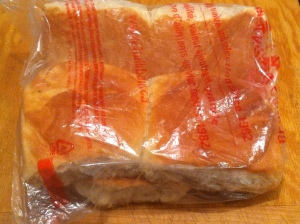 These are in a plastic bag, so not as easy to figure out; they are the Feather Biscuits that Mrs. Crafty sent home with me. Mmmmmmm

So, to continue the story . . . there we were, Mr. Crafty was working on some needlepoint (he’s very talented at many crafts, but woodworking doesn’t do well in the house and he likes visiting with us, so it’s needlework or knitting when I am there), Mrs. Crafty was painting and distressing a large wooden birdhouse that Mr. Crafty had built for her, I was knitting on one of my barn cardi’s sleeves. Then the phone rang; a cousin of their son had texted him that friends of hers had a boxer dog that was going to be shot (for killing a goat, was the story) within two hours if a home wasn’t found for it. Conversations took place. Back to crafting. We made it through two of the original Frankenstein movies with Bela Lugosi and co. when there was a knock at the door and in walked the son, with the boxer. A certain amount of commotion ensued; the two teacup Pomeranians were put in their cage and the cat outside. The boxer is four, so still quite active and naturally inquisitive. In sniffing around, he nudged my small-bottomed coffee cup with the predictable results. It was funny, in a way. The son grabbed my iPhone and iPod from the flood and dried them off immediately. I, on the other hand, grabbed my notebook with all the notes about the cardi. I’ll have to share a photo later; don’t have one yet. It was pretty wet and the gel pen was running a bit. I hope the notes are readable. It’s still sitting with paper towel crumpled and set between the pages.

So, the dog turned out to be fairly well-behaved, allowing for natural curiousity, and settled down in a bit. Back to crafting. Then another phone call, asking if the two adorable youngest grandkids could come for the evening and night. Yes, of course. We had supper (yummy chili and Feather Biscuits hot from the oven; and we had one biscuit each before supper, just to make sure the recipe still worked. 🙂  )

The son returned, to borrow the dog for overnight, so his girlfriend could meet it. He has four dogs (city limit), so it can’t stay at his place. We had coconut rice pudding for dessert, made from leftover coconut rice that had accompanied butter chicken for a previous dinner. More yummy!

Then the grandkidlets arrived. Cuteness doubled! The boy is three and the girl is one and a half. They haven’t seen me for six months, but obviously remembered me well (I’m sort of grandmotherly, I guess); it wasn’t long before the wee girl was sitting cuddled up to me, elbow on my lap, talking away. The boy had a small bulldozer toy, which he handed to me, saying that it was for me to take home. Well, you have seen part of our place now; where would it live? So, not to hurt his feelings, I thanked him for his generosity, kindness and thoughtfulness and asked if it could live at Nana and Papa’s place; that way I could play with it when I was there and he could look after it for me when he was there. He thought that was a great idea, so now my bull dozer is living with Mr. and Mrs. Crafty.

The parents left, the son and the boxer dog left and peace of a sort descended once more. Of course, the doves were laughing maniacally in their corner cage, but the other animals and fish are silent (well, except for the dogs, but they were quiet once things were back to normal).

Shortly after that it was 9 pm and Mrs. Crafty took me home, along with my three bags, some buns and the lovely box and its wrappings (which I also kept, as I love the sweet cartoon drawn by the B.O.) I don’t think there is hope for me, really.

I have joked that when I die, the best thing to do would be to put me on a large barge, pile my things around me, tow me out to sea and then fire a flaming arrow into the heap. I would then enter the next world with everything I might need for the journey (don’t confuse me with the facts here, please! 🙂  ) A true Viking funeral in the tradition of my maternal ancestors . . .

the girl’s things, ready for crafting in the  afterlife . . . 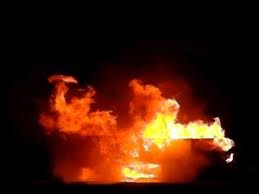 Time to get off the PC and get something real done . . .

Thanks again, to Christi and the Bearded One, for the best gift in a very long time. Big hugs to you both.

Nearly forgot to mention, I also received a package with my next set of scarves for dyeing, so that’s up soon, too.