First I apologize for not answering all your lovely comments (again!). I’m nearly out of time and I had to make a choice. So the post won out . . .

No, not the lovely Emerald Scarves post . . . due to events beyond my control, I’m still not quite done with the ironing. But, to my (small) credit, I did get the dyeing done!

A variety of ribbons, some with one dip, others with two; the ones on the far left are amethyst purple with green over-dyed at the bottom. I wasn’t thinking when I tied them onto the dyepot handles, so the purple transferred to one of the greens, leaving (luckily) only a couple of purple blots. I will likely use that bit of ribbon for something myself. 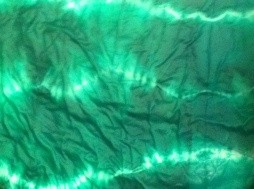 One of the first green scarves, just rinsed and about to be rolled in a towel ’til it’s damp dry and ready for ironing. This time I’m ironing them damp, with spray starch as well.

There are six darker green scarves and three lighter green. In person, it’s a marked difference; in the photos, I don’t think it shows up that well. Both are very spring-green, though, and looking at them makes me happy! (these are not yet ironed, of course)

What I was watching while the scarves cooled enough to rinse out: an old favourite, “As Time Goes By” with Geoffrey Palmer and Judi Dench, whose work I love. I just saw a film on tv called “The Lavender Ladies” starring Judi Dench and Maggie Smith!!! Set in the ’30s, they are older women who lived through the First War. There is a violinist, too,

whose playing is so moving . . . I won’t tell the story; you’ll have to find it yourself. 🙂

Now, I have to say there are two reasons to thank Wendy from Quarter Acre Lifestyle: 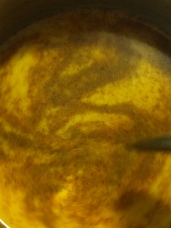 The Golden Yogini Milk mixture, coming to a boil (I had fun playing with the spoon and swirling the floating spices around in fascinating patterns (see left photo)  🙂

Ice cubes, waiting for the golden goddess to descend and transform them . . .

The frothy drink in all its golden glory . . . it was as yummy as advertised, even though it was iced, but not as thick as my coffee shop iced lattes; next time I’m going to try adding some protein powder and maybe a banana. Banana chai, anyone?

This next bit deserves its own post, but I am conscious that FeedReaders can get clogged up by people who post multiple posts in one day (never mind over a week), so I’m just tacking it on here. It’s definitely the biggest bit of the day, though. 🙂

Background:  Today, while waiting for a the grocery list to be made up, I played a few games of Bejewelled Blitz, my not-so-secret vice. I play with two young friends and we each send ‘gifts’ of coins to the next person, who sends to the next, etc. So we all get 40 ‘gifts’ of virtual coins a day (ideally). In addition, there are monthly bonuses you can ‘buy’ with your virtual coins and ‘boosts’ that cause you to win more points. If you buy a ‘shamrock’ bonus, at the end of each one minute game, you see nine shamrocks and when you click on one, you gain however many coins are behind it.

🙂 I know, get to the point, Linne (you are assuming I have a point, and you are correct!) Today, for the first time, ever!!!, I chose the highest-paying shamrock four times in a row! 100,000 coins (all virtual, of course; I’m not the sort of idiot who spends hard cash on virtual coins to play a game . . . I may be financially challenged, but not that much!)

Anyway, that made me feel VERY LUCKY and quite Green Little Leprechaunish and Pots-o-Gold at the end of the Rainbow were seen floating around between my ears (well, I have to keep something there, don’t I?)

When I went to the grocery store, I took along Mum’s lotto tickets from last week along with my own tickets. Just in case, you see . . .

Now, wasn’t that nice? And worth waiting for? The last time I had a win over $20 was about five years ago, when I won $100, just when I needed it. So I bought a couple of tickets for us for this week and the rest went into the grocery fund.

Oh, I forgot to say why I’m thanking Wendy for this (and any of the rest of you lovely readers who put up with my teasing and procrastination and whatnot . . .

You may have seen our comment exchanges centred on how nice it would be to win the lotto. Well, here’s the first taste . . . As I always say, if you don’t buy the ticket, don’t expect to win . . . both Wendy and I know people who’ve won large amounts twice (the man I met is a friend of a friend and won two very large lottos. It was very inspirational to meet him.) Anyway . . . Wendy’s comments caused me to think about being lucky and how lucky I’ve been all my life, in so many ways . . . and now I wish that you all may be even luckier than I am . . . always . . .

Now, for all you folkies and John Denver fans, here’s a link my brother-in-law sent me:

It’s over an hour, so I haven’t heard it all yet, but if you like this sort of music, it’s great!

For those of you who like very bad jokes (or, more likely, your men who do LOL), here’s a song by Woody Harrelson and John C. Reilly   Don’t say I didn’t warn you!

It’s from a movie called “A Prairie Home Companion” (Robert Altman’s final film) with Meryl Streep, Kevin Kline, Garrison Keillor, Lily Tomlin, Tommy Lee Jones, Maya Rudolph, Virginia Madsen, Lindsay Lohan, etc. It’s loosely based on the real-life radio show of the same name, which was created by and stars Garrison Keillor. I love the move, because much of its music and style are what I grew up with when I was young.

And the 20th Anniversary Concert (1989) of Steeleye Span

and one last album: The Pentangle, the first by the group of that name

It brought together their separate influences of folk, jazz, blues, early music and contemporary song-writing.”