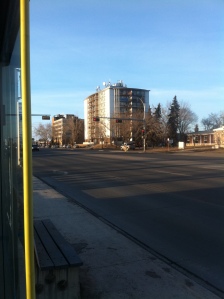 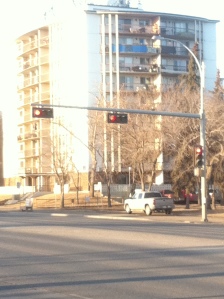 I haven’t said much about weather for a while, so here are two pictures of our building, taken from the bus stop as I was going into town last Friday. Mum’s suite is the top floor facing west over the street (on the left of the second picture). You can see that the snow appears to be gone . . . it was up to +11C today, but we have temps in the minuses again forecast for the weekend, with a good chance of up to 4 inches of snow. So good thing I didn’t get too excited . . . My FYS had a birthday at the end of March, which reminded me of how fast time goes by. Seems like just the other day I was packing him everywhere; then it was the violin, and during that time he got his first skateboard and that was history made . . . 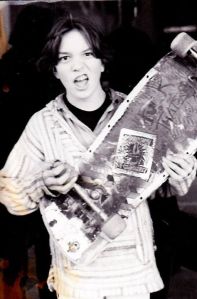 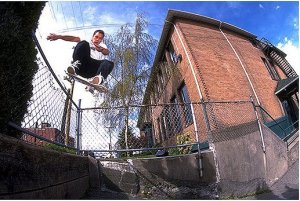 At 12 or 13 with his first skateboard and cute attitude! (and the then-obligatory poncho a la one of his skating heroes) The next photo was in a skater magazine and taken later (in his 20s I think) skating in Vancouver, BC. He always makes it look so easy! 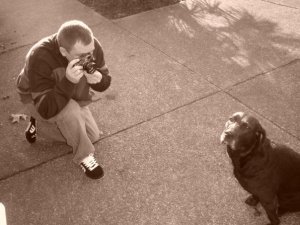 His is an excellent photographer and sells to a variety of skateboarder magazines, but I like these pictures of him getting close up and personal. He’s an avid fisherman these days, too, making his own flies and mostly doing catch-and-release. But he doesn’t really care if he catches anything; he just loves being outdoors. 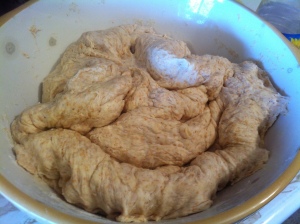 This morning, I got up early to wait for the balcony inspector and felt like being productive, so made a batch of the Feather Buns. I got the recipe from my friend Mrs. Crafty on our last visit. If anyone wants it, I’m happy to share. The original called for white flour, but I used about 40% whole wheat (ran out of WW, so the rest was white). I should have taken a picture of it all risen in  the bowl, it was magnificent!

The pans being readied.

I proofed the buns and two tiny loaves in the oven so they would be ready first. 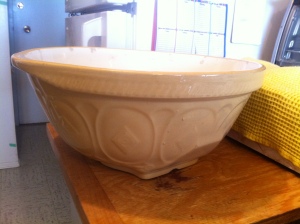 Mum’s lovely old bread bowl. I’m pretty sure Narfie7 has one like it, too.

Ready for the oven!

Mum’s large bowl with the smaller one inside. I love these! 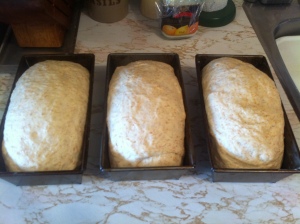 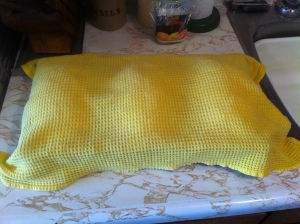 To slow them down, I covered them with a tea towel wetted with cold tap water.

When I was in school, Mum baked several times a week (well, 9 kids and a husband who worked hard in the bush or in a welding shop . . . ). We would get home from school and she would have timed the buns so they were just coming out of the oven. So hot, we just poked a thumb in one side, dropped in a bit of margarine and then some home-made jam. I still think of those buns when I smell fresh baked bread . . . 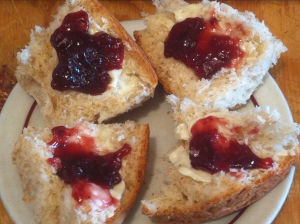 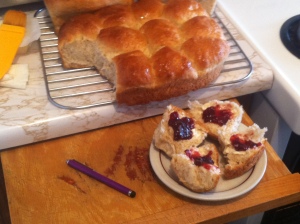 You can see how fluffy these are . . . and just as yummy as they look, too!

It took me over an hour to find Christi’s recipe for her Family Casserole, Soup and Baked Chicken. Might have been because I misremembered the source and was searching on Wendy’s blog. Am I getting older or what? Don’t answer that, ok? 😉

Didn’t have all the recommended herbs/spices, so here I am pounding some rosemary into submission (I ground it down with love, though . . .)

The chicken breasts and back simmering away with onion and flavourings in the lovely Le Creuset stockpot my youngest sister gave me a while back . . .

A random set of photos of the loveliest sunset a couple of nights ago.

I wish the colours translated as they were seen. Just gorgeous! 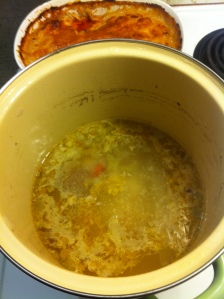 The soup, now nearly a distant memory 🙂 . . . and the amazing, very meaty casserole. All gone as of yesterday. It’s quite a bit of meat, but most tasty. Of course, I messed around with the recipe (don’t tell Christi . . .) Mum can’t eat really spicy food, so instead of the pepperoni, I used the mild Italian sausage that I buy once every few months. Lots of flavour, not too much spice. I also left out the pasta and Mum had potato with hers. I added shell pasta to the soup, though. This recipe makes a LOT of casserole, but I bet it could be frozen if you didn’t want to eat it every day as I did. 🙂 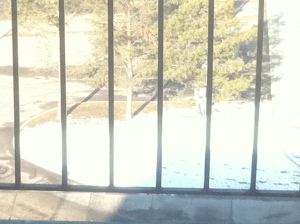 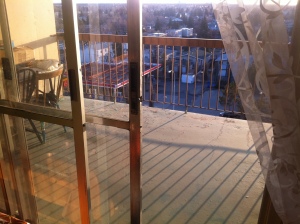 Yep, the doors are open to the balcony. You can laugh now . . . I left them open most of the day for the past three days (including today) and was reminded of one thing I dislike about living  on a main street: apart from the dust (to rival Narf77’s, truly), there is a LOT of noise: emergency vehicles at all times of day and night; rush hour morning and night and then the motorbikes. I’m not sure why they don’t have to have mufflers that work and also why they feel compelled to rev the engines mightily just as they pass our building . . . oh, well, at least it’s been warm for a few days. So noise is a small price to pay, I think. And the extra sunshine is so nice . . . I wake up early now and have become energized (more on that in another post), so have been spring cleaning, a bit more every day. Very satisfying.

The last bit of the casserole. Mmmmmmmmm………….

I need to mention, too; starting tomorrow early, I’ll be staying with my Aunty again, as my cousin has found a new job. I’m not sure how long he’ll be away. Likely a couple of weeks; that seems to be standard. I’ll be upstairs a couple of times a day to continue the spring cleaning and to check email, etc. So much easier on a desktop than on my phone . . . I have lots more to post about, but am waiting for that Happy Mail to make landfall in New Zealand. Wouldn’t want Pauline to have any hints . . . 🙂

What I’m listening to today:  Runrig (what else?) in their Mod for Rockers concert.

and one of my old favourites: Janis Joplin