That’s the front, as it’s grown over the past three weeks (well, I didn’t touch it during the middle week, so during the first and third weeks). Thanks to Dani’s tutorial, it didn’t take me long to get the hang of this new technique. A couple of bits took some thinking, then it all became clear . . . Anyone else working on this (besides Pauline)?

I thought I’d have two photos to add tonight, but alas . . . 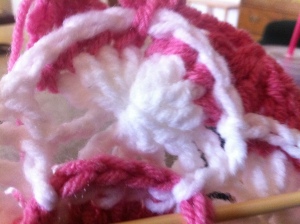 See what I did? One and a half circuits back, I made only eight double trebles in the corner; there should be twelve . . .  so guess what I’ll be doing later on . . . that’s right, ripping out one and a half circuits . . . I do count carefully, so I must have been chatting with my Aunty and not paying quite enough attention for just a minute or two . . . or else I was distracted by the news last night (more likely, now I think back).

Knowlton Nash, a well-respected tv journalist for several decades and anchor for “The National” before the current anchor, Peter Mansbridge, died yesterday at the age of 86.

A good age, I know, but still . . . so many people I’ve looked up to for much of my life are moving on . . . and I miss them. Mr. Nash covered so many of the events that helped to shape my life and thinking; the Cuban missile crisis, the Kennedy election and later assassination, Che Guevara, so much more . . . He was my first image of a good journalist and now Mr. Mansbridge carries on in the same manner.

Anyway, not much else to report and not much time left tonight. We had a lovely windy storm last night and today it was deliciously cloudy and we had a big downpour earlier (the sky darkened so that I wouldn’t have been able to read indoors) and then another, longer one from just before supper. Rain and the leaves are beginning to appear, not to mention the grass greening . . . makes one believe in spring!

I’ve made bread again, using less of the rye flour. Still ended with dense, low loaves; still, they taste wonderful and I’ve made some kefir cheese and mixed it with bought chive cream cheese; I spread that on the ‘rye’ bread and it’s perfect with a cucumber, onion and tomato salad! I’ll make bread again this week, but I think I’ll only add rye flour to part of the dough this time. I like bread tall enough for sandwiches. 🙂

Have a great week, everyone! I’ll be back to reply to comments soon. 🙂

Runrig and the Drums

Woody Guthrie playing ‘All You Fascists Bound to Lose’

Pete Seeger singing ‘Which Side Are You On?’

this last was sparked by a picture on Facebook today: