Well, my friends, it’s time . . . to get back to regular posting, I mean, as I finally caught up with your kind and thoughtful comments!  I wonder if others find it hard to know where to begin, too? I’ve been thinking about what I want to share and so on, then decided I would simply upload images from my time in Tacoma (part One), then add notes and probably some of my thoughts along the way. I hope that works for all of us.

I took literally thousands of photos after I left Edmonton late last September, so there were plenty to choose from.  I think I will write above the photos (just so you know what I’m going on about . . .).

This is a long post, so don’t worry if you can’t get through it all, and don’t feel obliged to comment on all, or any, of it. I totally understand about that.

Here is a photo from my friends’ back porch in Langford, BC, where I stayed while waiting to get new ID suitable for entering the USA. That took longer than I’d imagined, partly due to the fact that I had only my birth certificates with me; all else is in storage ‘somewhere’. Anyway, the autumn colours were lovely and I especially liked this view through the latticing.

We kept busy, ,y friends and I, as I waited. One trip we took was to a small country market and I couldn’t resist taking this photo of the pumpkin / squash display. I have a painting planned, based on this sumptuous collection of colours and shapes.

Once I arrived in the wee Varda (travel trailer; I like the original gypsy word, VArdo, but liked to think of Varda as a feminine form), I adjusted my diet to fit my food prep options. I have never cooked in a microwave, but really didn’t want to have the propane hooked up, so I quickly learned to make simple and delicious meals. More about that in a separate post, I think. Below is the glass dish I used for cooking everything from morning oatmeal to pasta and veggies.

It wasn’t long before I got back into crochet and knitting. More on that later, but I couldn’t resist sharing this cute photo. So true, isn’t it?

I had fun taking photos in the Varda, too. Some of my oranges were especially interesting in shape and I liked the composition of this one sitting on my unmade bed one morning.

My friends have a lovely upright piano that belonged to Mr. R’s mother. They loanded me a book for adult learners and I had a lot of fun any time they were both out, just noodling around and working my way almost to the middle of the book. I used to attend all my younger son;s lessons (violin, viola, piano, etc.) and had always wanted to play myself. Music is very healing, at least for me. There is a wonderful book called “Music as the Bridge” that gave me a different outlook on the place of music in the world and in my life.

AS I think I’ve mentioned, <rs. R was not well for most of the first month that I was there. Once she was feeling better, we had some fun making Christmas gifts for her grandchildren. Each received a fleece blanket, which was made by putting two pieces of fleece back to back, cutting slits along the sides (we used masking tape so that the slits would be even in length), then knotting eacch pair of ‘tabs’.

This is the back of the blanket pictured above. 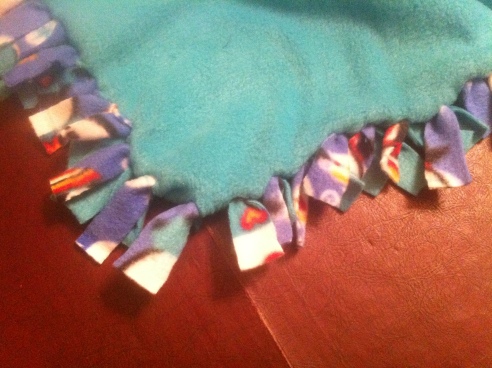 THEN, we got more serious about creativity. Before I went south, my friend J (Mrs. R) had asked me to teach her to knit and crochet again (she’d learned as a child, then not done any for some years). You may be appalled to know that I pretty much threw her in at the deep end when it came to the knitting. we decided that she would make a scarf for her husband for Christmas and chose patterns that reflected their individual heritages.

The scarf is made of Classic Wool on two sets of circular needles, so the pattern is always facing the knitter (easier for the knitter and making any errors simple to spot and correct.

In the end, though, J found the loose ends of the unused circular needle were too distracting for her, so I knit the pattern bits. She did most of the plain knitting, though. Here is the first end once the patterns were completed. The row counter is there mostly to mark the beginning of the raven pattern segment.

At the bottom is a row of Fair Isle hearts; J’s grandmother was from Oban and apparently liked to tease her husband about his being only a Lowlander.

Mr. R’s grandparents, like my maternal ones, came from Norway,, so we chose to include two ravens, one on each end of the scarf. They were considered to be Odin’s birds, Hugin and Munin (Thought and Memory), who flew all over the world each day, bringing back news to Odin. This pattern came from a book I had from the library a few years ago. The book is called Selbuvotter (Mittens/Gloves of Selbu); it has many lovely patterns for gloves and mitts traditional in Selbu, Norway.

The upper pattern band is also from the Fair Isle tradition. It has Os and Xs for Hugs and Kisses, with Crosses in between for blessings.

This is the ‘back’ side of the scarf.

J gave me two lovely rayon tops from Holy Clothing, a company selling ethically made clothing. This photo shows the embroidery around the neckline of my favourite piece.

In January, J drove up to victoria to visit her son and his family, so I went along and while I was in Langford again my friend L trimmed my hair. The longest parts were finally down to my waist, after many years of wanting it to all be that long, but it was looking quite ragged, so I bowed to necessity. I don’t care for it this short, but it looks neater, so that’s ok. Besides, it should grow in again. 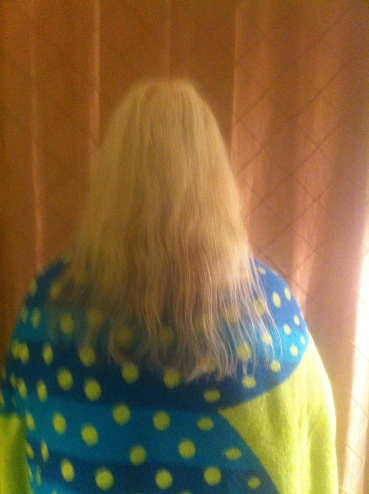 WE left late in the afternoon, taking a ferry to Port Angeles, WA. These are poor photos of lovely views from the ferry; James Bay (Victoria) in the last light of the sun. 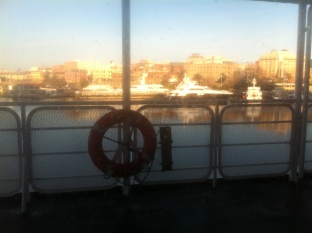 reativity!  While in Tacoma, J and I began going to Hobby Lobby and Jo-Ann stores; occasionally to Michaels as well. To start her off with crochet, we had purchased a small ball of variegated khaki Sugar n Cream cotton yarn.  With an eye to the future and savings (ha!), and knowing that J loves turquoise and teal, I talked her into buying these two cones of cotton (also Sugar n Cream).

But then, one evening as I was sitting with her while she worked on a square dishcloth in the khaki, I asked if she’d mind if I started a ‘small’ piece using these two colours. You see, I’d had an idea . . . what if one was to create a circle using both colours in concentric spirals?  Of course she said yes and so it began . . . You can see the beginning below. I never wrote down what I did, so if you feel inspired to make your own version of this, ou will have to do as I did, make it up as  you go along.

After a while, I switched to treble (US double) crochet, with a chain in between, which you can see in the first photo. Then, for a change, I began working in the back stitches, creating a lovely ripple as if there were waves washing up along coral and white outcrops. The piece grew like Topsy and I bought two more cones and two more cones and one final cone of the turquoise. so, seven cones in all. At one point, I found myself creating interesting ‘petals’ in the variegated yarn, but they vanished in the next row. I remembered them, however, and re-created them as I came to the ends of the piece. By that time, it measured around seven feet across, I think. The final photo here is of the centre. I do have photos of the completed piece, but I’ll have to look for them.  spread out over a recliner chair, it covered it and hung down the back!  I’m rather proud of this piece. I think it’s the larges I’ve ever made; certainly it’s the most creative in terms of stitches and overall design. Not many things make me as happy as pure creativity, making things up as I go along. (although it doesn’t always work out so well, I have to admit). I’ll post the photos of the finished piece next time, assuming I can find the photos. 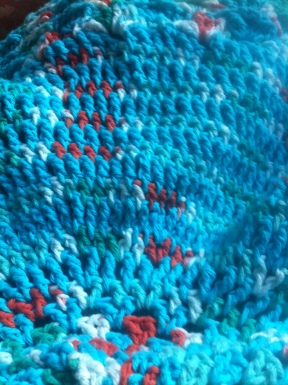 In the meantime, I am thinking of each one of you out there in the Virtual Village; those for whom things are going well and those facing a challenge or ten. Take care of yourselves, will you? I’ll be dropping by to visit soon.

And here’s my newest favourite album; it was the first recorded by Runrig, back when there were only four members. It’s not so much rock and, while it’s in Scottish Gaelic, I find it hauntingly beautiful. I find myself hearing it in my dreams and often waking to it in the mornings. i hope you enjoy it at least half as much as I do.

Love and Light to each of you.  ~ Linne