Hello, my friends. Did you think I’d gone into retirement? Nope, still getting adjusted to being home again and also working on plans for this coming year.

I hope you all had a good Christmas or Solstice or whatever you celebrate in December. And I wish you all the very best in this coming year.

I still have not faced up to downloading the photos that remain on the camera, although I did get all the pictures off my old iphone. My youngest sister was going to send me her ‘old’ phone, but there have been glitches. (trying to get a new sim to work in the old phone so I’d have something until the new one arrives. Oh, well . . .)  I love techy stuff when it works and the rest of the time . . .   I think now she is planning to send me something else.

Above is a photo of the Yarndale bus that ran between the train station and the exhibition site. (This year Yarndale was on the 29th and 30th of September and I had a ticket for both days. The first day I walked up through the park – you can see some photos of that walk on Lucy’s Attic24 site. The second day I took this bus, as I was on my feet the entire day both times, except for one short sit-down in the afternoon on the Saturday. There was just SO MUCH to see!) I think the bus picked people up from other locations, too. I loved the bunting on the front and inside there were small mandalas as well, making it all very festive.

You can’t tell from this selfie, but I wore my Runrig Tshirt and jacket to Yarndale. That’s a small crocheted butterfly pinned to the inside of the collar. They were this year’s donations, made by volunteers around the world, and were sold to raise money for this year’s charity, Pioneer Projects. They raised 2,339.94 from selling these! BTW, did you know that the collective noun for a butterflies is a Kaleidoscope of Butterflies? I love that! I chose a green one made in the same way my Mum used to make them (for fridge magnets, in her case) and partly because green was her favourite colour, as it is mine. If you’d like to see the amazing number and variety of butterflies, go to Lucy’s post about Celebrating Yarndale 2018 and scroll down.

I mentioned the Runrig jacket and Tshirt because at least four women stopped me to say they had been at Stirling on that historic weekend, too! It was wonderful to stop for a minute and reminisce with others who felt as I do about the band and their music.

Now I’m going to pick up where I left off in October, more or less . . .  I did make it to Skipton twice more to join in with Lucy’s Knit n Natter group. Such fun! Everyone was lovely to me and the staff at the cafe were, too. In the afternoon, both days, I wandered around Skipton, just drinking things in, then went back to Cooper’s Cafe for a snack and coffee or tea before heading for the train and Heaton. Yummy food they have!!

The first afternoon (02 November 2018) I wandered in and out of a variety of shops, mostly the charity shops, looking for souvenirs. I found Wooleys and had a great chat with the lady there, but they didn’t have what I was looking for; English wool! The wool was all spun in Italy, as I recall. But it was fun connecting.

Then further up the High Street, I found the ginnel (Yorkshire for a passageway with a roof) leading to the Purl & Jane shop! I can highly recommend P&J; Jane has created over 2,000 designs  in the past 20 years, by the way (read her About page for more information) and she carries a gorgeous selection of yarns. I was so happy to finally see some English wools!! (She is an official supporter of The Campaign for Wool) So I bought three balls of variegated green, needles and one of her patterns. And some buttons. The design only calls for one, but I could never have too many buttons!! I got to pet the dog, too  🙂 This yarn is for a special project and I’ll post about that soon, with photos of the buttons. (Anticipation 101, remember . . .)

On my way back to the ginnel, I noticed a small shop that looked interesting; it had some unique items of clothing hanging on a line along the wall. I was SO tempted, but I resisted and went on my way.

Next week, on Friday 09 November, I spent the afternoon a little differently. I made my way back to Purl & Jane to show Jane my progress on the green project. I was so thrilled with her design, I bought some lovely deep rose (close to magenta) in the same yarn. And more buttons! I had my project about half done by then and was very happy with it.

After another chat with Jane, I walked back toward the ginnel and this time I decided to go into the wee shop I’d resisted the week before . . . just to have a quick look, you understand. I have a card somewhere, but can’t locate it just now. I’ve looked up the address and it says now that the shop called “Sophie’s Handbags and Accessories” is permanently closed. However, I don’t know if that’s the shop I was in or an earlier one. I hope it’s an earlier one . . .

Another lovely lady to chat with, and some very unique clothes, handbags and other things, like jewellery . . .  I continued to resist, although I did stop to admire two ivory lace dresses, each with a matching jacket and fully lined, to boot. Luckily, they were a Small and a Medium. I held the medium up and it appeared to be likely to fit, although I haven’t worn a medium for a few years now. It was midi length, too, which I prefer. Resolutely, I put it back . . . and left the store . . . and got through the ginnel . . . all the time thinking of how lovely it was and how much it was my dream dress (I’m not easy to please when it comes to clothing and my life is more suited to jeans and Tshirts in any case). And then I found myself thinking that I’d never have another chance to buy it and I did a quick U-turn and returned to the shop! I’m pretty sure none of you do such things, right? I held it up to myself again and it still seemed like a close enough fit. And it was only £10, which is about $17 Canadian. And I succumbed to temptation then and there!

I noticed a stack of sheer scarves, too, and bought a couple of those as well. Oh, I was happy as I walked away! More on the dress in a bit . . .

I walked up the High Street further and stopped at the Holy Trinity Church of England. I happen to love historical buildings and churches and cathedrals in particular. I found some small items in the gift shop from another lovely woman and had time to light candles for several people, including all my blogging friends. This church was founded in the early 1100s and it was an amazing feeling just to sit in it. The stonework and stained glass were marvellous to view.

After my time in the church I found my way to Skipton Castle next door.

The castle seen from the air. You can see the church just above it and off to the left a bit is the High Street with the Market set up. 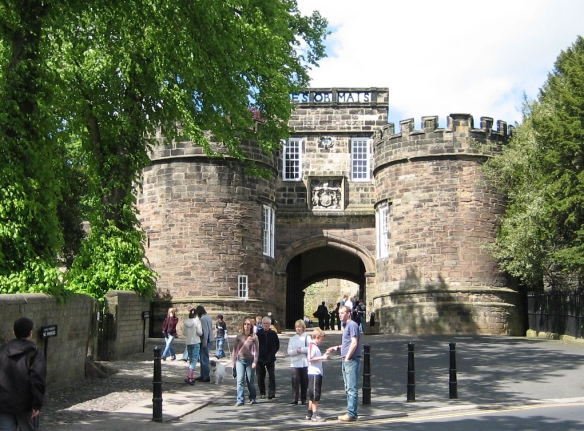 I had been told it was free to visit the castle, but it isn’t anymore. As I’d splurged on the dress, I didn’t want to buy a ticket. I was able to walk into the front bit (where you can see people in the shadows), almost up to the courtyard. And I did get to see some amazing details inside the small room where they sell the tickets, postcards and so on.

I really do have to get on with downloading the photos from my camera, don’t I? I’ll make that a priority this coming week.

In the meantime, once I arrived back at my room in Heaton, I took out the dress and tried it on . . . and it fit! I am still a bit in shock at that, really.

(I was walking so much and eating as well as I do here in BC, but not snacking and it made a big difference. I did put a few pounds back on over Christmas, as I do like the Christmas treats, but it’s coming off again now that life is back to normal and my cousin’s wife and I are walking four or five times a week at the local arena.)

I don’t have a photo of me where you can see the entire dress, but this selfie will give you the basic idea (please forgive the poor quality; it was night and the lighting was a bit dim. Also my hair, as it was the end of a day spent outdoors in the wind): 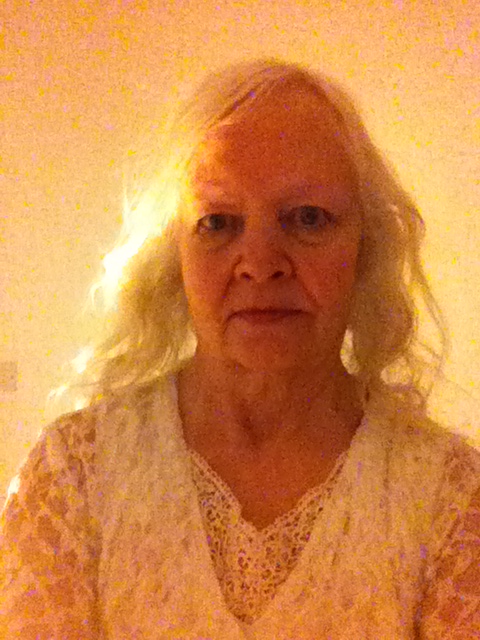 This is the prettiest dress I have ever owned and I’m looking forward to wearing it this coming summer. And I found a website that carries the exact shoes I’ve been thinking would suit it, too: Pompadour French Court Shoes! The heel height and shape are what I like best in a heel and the lace seems like the perfect finishing touch. The shoes won’t be in the budget for a while, but one day . . .

And here’s some music for you:

Mingulay Boat Song by The Corries, who were my favourite group up ’til I came across Runrig. Now first place is shared between them.

Somewhere, featuring Canadian Bruce Guthro (lead singer) and Scottish Julie Fowlis (special guest) on the vocals. The video is beautiful, and the words, too.